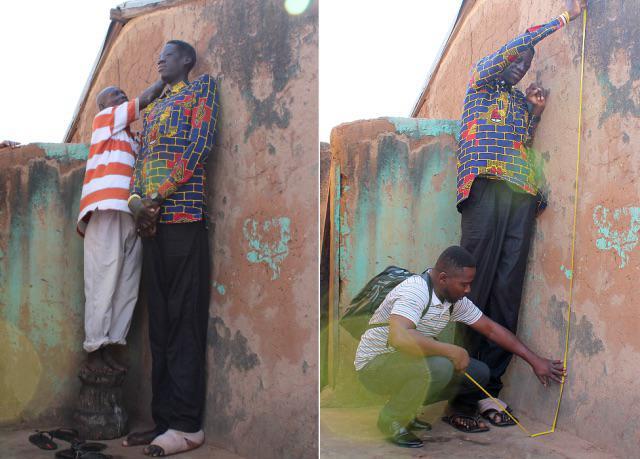 Meet Sulemana Abdul Samed, a 29-year-old man from Ghana who is potentially the world’s tallest man, measuring a staggering 9 feet 6 inches. Born and raised in a village in Northern Ghana, Sulemana was diagnosed with gigantism a few years ago. Known by the nickname Awuche, meaning “Let’s Go,”.

Sulemana has never stopped growing and recently caused a spectacle at the hospital when he was measured against a rod and found to be taller than the scale. A team of health professionals had to use a pole as an extension to accurately determine his height, leaving the staff shocked and unprepared.

Despite his unusual height, Sulemana remains a friendly and approachable person, known for his good-natured personality.”

A BBC reporter set out to verify the truth about Sulemana Abdul Samed’s alleged height of 9 feet 6 inches. After searching for a building tall enough to measure him, as most houses in his village were not tall enough, they found a wall measuring 7 feet 4 inches.

The current tallest man in the world measures 8 feet 2.8 inches. Despite this, Sulemana remains optimistic, saying, ‘I’m still growing tall. Who knows, maybe one day I may get to that height too.’ He also shared that he continues to grow every three or four months and that if someone hasn’t seen him in that time, they would notice an increase in height.

Sulemana first became aware of his unusual height when he was 22 years old and living in the capital city of Accra. One morning, he woke up to find his tongue had expanded to the point where he was having difficulty breathing.