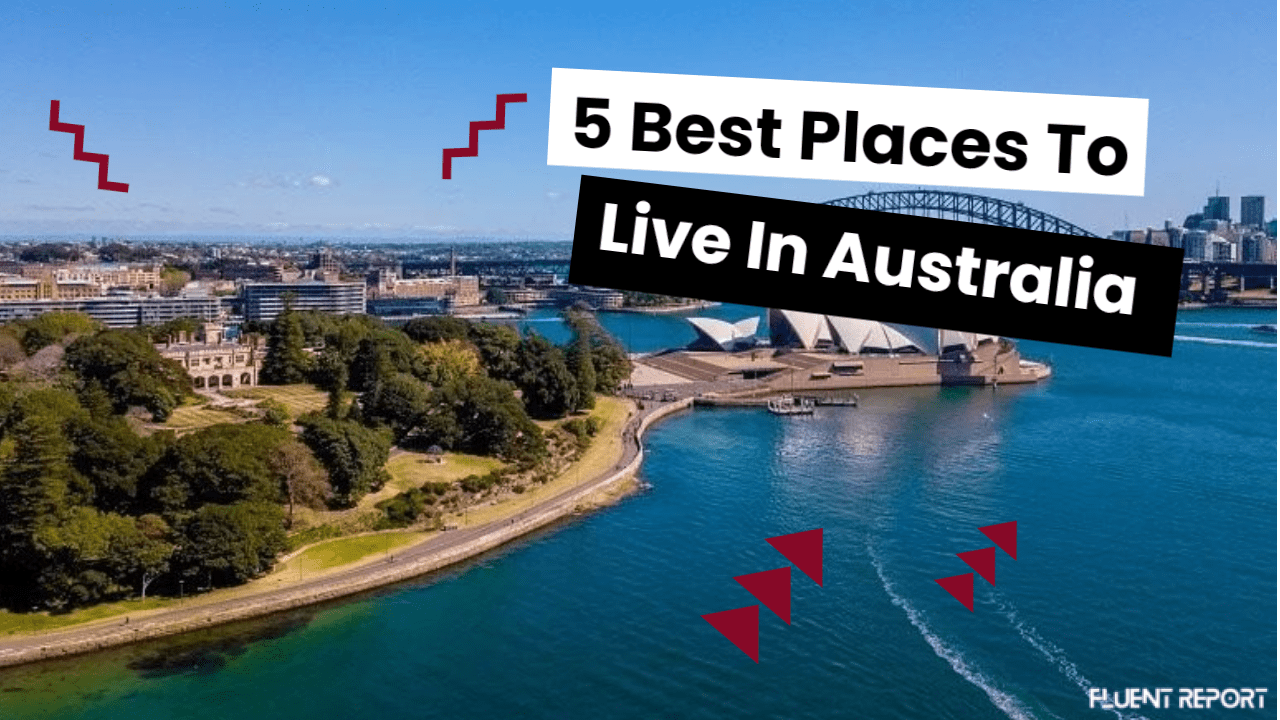 Australia is popularly known as one of the best countries to live in. Even though the cost of living is high, a high standard of living is still possible. This article will give you the 5 best places to live in Australia (2023).

It’s easy to get caught up in the hype surrounding any new country. In the case of Australia, there are a number of reasons why it has become one of the most popular countries for immigrants from around the world.

When considering where to live in Australia, you might select one of the cities based on its economy or tourism, or perhaps even a favourable climate.

But what about the best places to live? Do you want to live next to a lot of Australians? Will it be easier to get a visa if your city has strong job markets? Are there any must-have amenities that everyone is looking for? These are all questions that you can answer with our research on the top 5 places in Australia for 2023.

Best Places to Live in Australia

We’ve worked out which place is best depending on what you care about most, from culture and climate to job opportunities. Check out the table below for our full rundown.

Brisbane is Australia’s third-largest city, and its residents love to get outdoors. While the urban center of Brisbane is all shiny skyscrapers, the city is also ideally placed for getting into nature.

Brisbane residents are an active bunch and love to enjoy their beautiful river, whether they’re jogging alongside it or sailing on it.

The rest of Queensland’s delights are within easy reach of the Gold Coast and the Great Barrier Reef is among the highlights.

Brisbane is a thriving metropolis. It’s attracted workers in the hospitality, health care, and manufacturing industries.

But you’ll also find some of the country’s most beautiful suburbs, such as Paddington if you’re looking for a quieter lifestyle. Families might prefer Moray field for its proximity to the city.

2. Adelaide (Best for Food and Drink)

The city recruits a minimum of 5,000 skilled migrants a year, especially in the fields of healthcare, education, and manufacturing.

Adelaide is a popular destination for ex-pat families who live in the leafy suburbs of Belair and Banksia Park.

The Adelaide beaches are beautiful and often wind-swept; or if you want a change from the beach, you can travel out to the nearby Barossa Valley vineyards to sample regional food and wines.

The capital of Australia, Canberra, has a sophisticated atmosphere that really comes alive when the country’s parliament assembles.

Although it is the nation’s capital, Canberra has fewer than 400,000 residents giving it an almost small-town charm with its pretty tree-lined streets.

Canberra has a great restaurant and bar scene, some interesting cultural attractions, such as the National Gallery of Australia, and no end of adventure activities in the hills and bushland that surround the city.

In summer, residents take to their boats on Lake Burley Griffin to enjoy picnics, bike rides, fishing, and sailing.

Hobart, the second oldest city in Australia, is located on the south coast of the country on the banks of the Derwent River.

The city is popular with those who prefer cooler temperatures, with summer temperatures a manageable 68°F. It has a lovely relaxed pace of life.

Hobart has a wide range of real estate, from the luxurious to the affordable, and its desirable riverside suburbs are popular with families and retirees alike.

The suburb of Kingston recently received an honour when it was named the most family-friendly place to live in Australia.

Hobart is not a growing employment market, but it does offer steady and steady job prospects, especially for skilled ex-pats in the construction, viticulture, and engineering industries.

Come for the arts scene in town, scale Mt Wellington and relax on the beach; or head to Sandy Bay for a day of surfing, swimming, and sunbathing.

Sydney, the most populous city in Australia, is also home to some of its most iconic sights.

Cruise through the harbour to see the famous opera house or join the surfer dudes down at the beautiful Bondi Beach.

While younger ex-pats prefer central Sydney’s vibrant nightlife scene and many families choose to live in the suburbs, there are plenty of activities within easy reach of any neighbourhood.

Also Read
Top 10 Most Dangerous Animals In The United States

Western Sydney is popular with American ex-pats, while the Northern Beaches Area is ideal for families.

Sydney is a major player on the world stage, which has an undeniable effect on its cost of living.

The real estate market here is comparable to that of New York, placing it among the most expensive places in the world.

3 Things To Consider Before Moving To Australia

If you’re moving to Australia, you should know that the culture here is much more than just a taste for beer and barbecues (although there are definitely those things too).

We’re talking about a land full of genuine variety: You can ski or surf on the same day.

Everything from wildlife to the weather is colourful, exciting, and slightly dangerous. Australia is a place where no two people will experience the same thing unless they follow each other around.

Here are the 3 things to consider before moving to Australia.

1. It is absolutely massive and crowded

Australia is about three million square miles. This comes to about the size of Europe. If you put a map of Australia over a map of Europe, it pretty much covers the whole thing.

2. The weather varies a lot

People often believe that Australian weather is uniform throughout the country. This is not true. When it’s summer in the south, it’s normally a wet season in the north.

Brisbane and Melbourne, the two major cities of Australia, have quite different climates.

Brisbane is generally blessed with a tropical climate, while Melbourne is known for having “four seasons in one day” meaning that even in wintertime it can snow there.

In Australia, the sun shines brightly year-round. Every summer, the mercury rises and the temperature reaches 50°C in some areas.

Recent heat waves in Sydney have melted tarmac roads and killed hundreds of baby bats. However, it’s not just the heat that’s dangerous.

The ozone layer above Australia is unusually thin. This makes the Aussie sun especially powerful, which is why the 1980s ‘Slip, Slop, Slap’ campaign was created.

If you want to stay safe from the sun, slip on a shirt and slop on some sun cream, then slap on a hat. And it has to be in that order.

Which Is The Cheapest City To Live In Australia?

Despite recent property prices that have made Hobart the most affordable city in Australia, it is still less expensive than other cities like Sydney or Melbourne. Houses in Hobart are about 25% cheaper than the national average at $444,500 AUD ($315,000 USD). If you want to live in an island paradise, then Adelaide and Perth are among the cheapest cities to live in mainland Australia.

Which Is The Most Expensive City To Live In Australia?

Which City In Australia Has The Best Weather?

Perth is the sunniest city in Australia, with 8.8 hours of sunshine per day on average, or 3,200 hours of sunlight each year. The weather in Perth is mild all year round: it rarely drops below 50 °F in winter and doesn’t get below freezing in summer. Bonza!

Where Is The Best Place To Find Work In Australia?

Sydney’s booming economy offers the best job prospects for ex-pats moving to Australia. With an unemployment rate of around 3.8%, Sydney has a thriving economy in industries such as financial and professional services, construction, and manufacturing.

Australia is one of the most extensive countries in the world, and it has a vast number of unique cities and ecosystems.

It’s impossible to identify the best places to live in Australia without conducting a detailed, national study.

In this article, we’ve created a list of 5 cities which are most likely to appear on the top 10 lists of best Australian cities to live in 2023.

What ranks the best places to live in Australia? Is it the coastal cities, the suburbs, or the small towns in between? We cannot say Currently, we do not have all of the criteria required to give you a precise number of the top places.

But hopefully, this list will be able to point you in the right direction towards finding a place to call home. As always, your suggestions and comments are welcome!